How can we help you today?

A cryptocurrency's coin emission is the creation of new coins, usually as part of the block reward.  PIVX currently has a coin emission of up to 6 piv per block.  Based on a successful proposal, the PIVX reward system changed when zPoS was enabled. 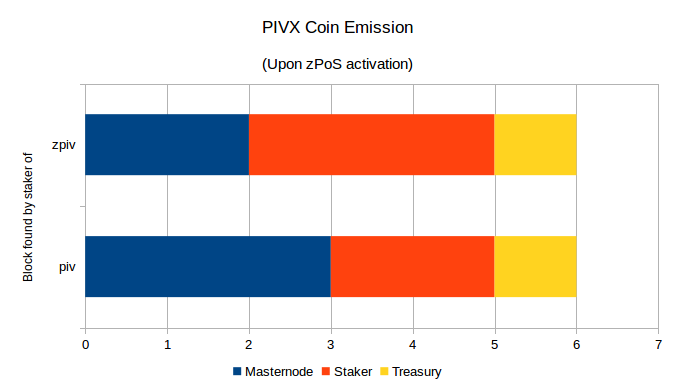 PIVX has a tail emission like Monero and Ethereum, meaning the block rewards continue indefinitely.  This is in contrast to coins with a max supply like Bitcoin, where the rewards eventually stop far into the future.  A tail emission is important because the block rewards are incentives for network participants to continue hosting and securing a healthy network without passing costs on to users in the form of high fees.  Tail emissions continue the rewards that made the network strong and secure in the first place.  Operating a network without these block rewards is likely to result in participants acting outside the best interest of the coin, reduced security, reduced decentralization, reduced censorship resistance, and reduced network strength.

PIVX was designed this way because it doesn't have or need miners, so our rewards are paid to people hosting our network (masternodes), people holding the coin and securing the network (stakers), and people working to improve and promote PIVX (treasury).  It is a fully self-sustaining economic model which will function indefinitely.  A tail emission does not mean we have an infinite supply or any other system that would devalue the currency, in fact it perpetuates the value of the network and therefore the token.  As we will see in the inflation section, PIVX has one of the lowest inflation rates around.  Additionally, by staking you can not only offset inflation but you can earn at around double the rate of inflation just for holding PIVX.

The seesaw mechanism was an algorithm created by PIVX to maintain a healthy network balance between masternodes and stakers.  It was removed with the activation of zPoS because it is incompatible and no longer needed with a network as mature as PIVX.

Every month, the PIVX masternodes vote to decide which proposals will be funded by the block reward.  Proposals that pass are funded in what's called the superblock.

The treasury allocation in the block reward doesn't actually happen in each block.  It happens at the superblock at the end of each voting cycle (about once a month).  You may have noticed that the coin supply allocation for the treasury is "up to" a certain amount.  This is because any piv that are not allocated for a proposal are not created.  The order the proposals are paid out is based on their net approval.  The highest net approved proposals are paid out first and the system continues down the list until proposals either do not meet the approval threshold or there are no longer enough treasury piv to fully fund a proposal.  If a proposal can't be fully funded with the remaining piv, it is not funded at all and neither are any further proposals.

On most coins, inflation is as simple as the existing supply plus the coin emission, but with PIVX there is another factor to consider.  Most coins will pay transaction fees to their miners, but PIVX doesn't need miners so it simply burns fees out of the coin supply.  This means the fees are kept at their absolute minimum and each burned fee actually causes some deflation.  People are sensitive to the inflation rate of a coin because inflation can represent the devaluation of your money.  Conversely, deflation would increase the value of your coins.  This is all a function of supply and demand.

For an idea of the inflation rate, accounting for only coin emission and not coin burn, check the Economics > Inflation section of this chart to see how PIVX compares to other coins.  The formula for annualized inflation is as follows:

A good example of burn deflation is block 863794 from when the automint was first activated.  This block minted 5 new piv and contained 1,112 transactions minting zPIV with a 0.01 piv fee per mint.  That gives us about 11.12 piv burned in fees, meaning the coin supply decreased by about 6.12 piv that block.  This block is of course an outlier at this point in time, but it is a good example of deflation that has already happened.

This supply projection chart shows the projected supply under different burn rate scenarios as outlined above.  As we can see, our already low inflation rate goes completely flat at around 10 fee transactions per second.  This is only about 50% higher than the throughput Bitcoin is currently struggling with.  As shown in the block above, we have already managed 18.53 fee transactions per second in a block and the masternodes can scale to handle magnitudes more than that.  What this means is that PIVX will even be deflationary long before bitcoin is.

On top of all this, PIVX allows you to easily stake your piv and earn rewards at about double the rate of inflation.  Before accounting for fees burned out of supply, coin emission only creates about 4% inflation.  However just by staking, you can earn about 6% to 12% annually in staking rewards.

Did you find it helpful? Yes No

Send feedback
Sorry we couldn't be helpful. Help us improve this article with your feedback.